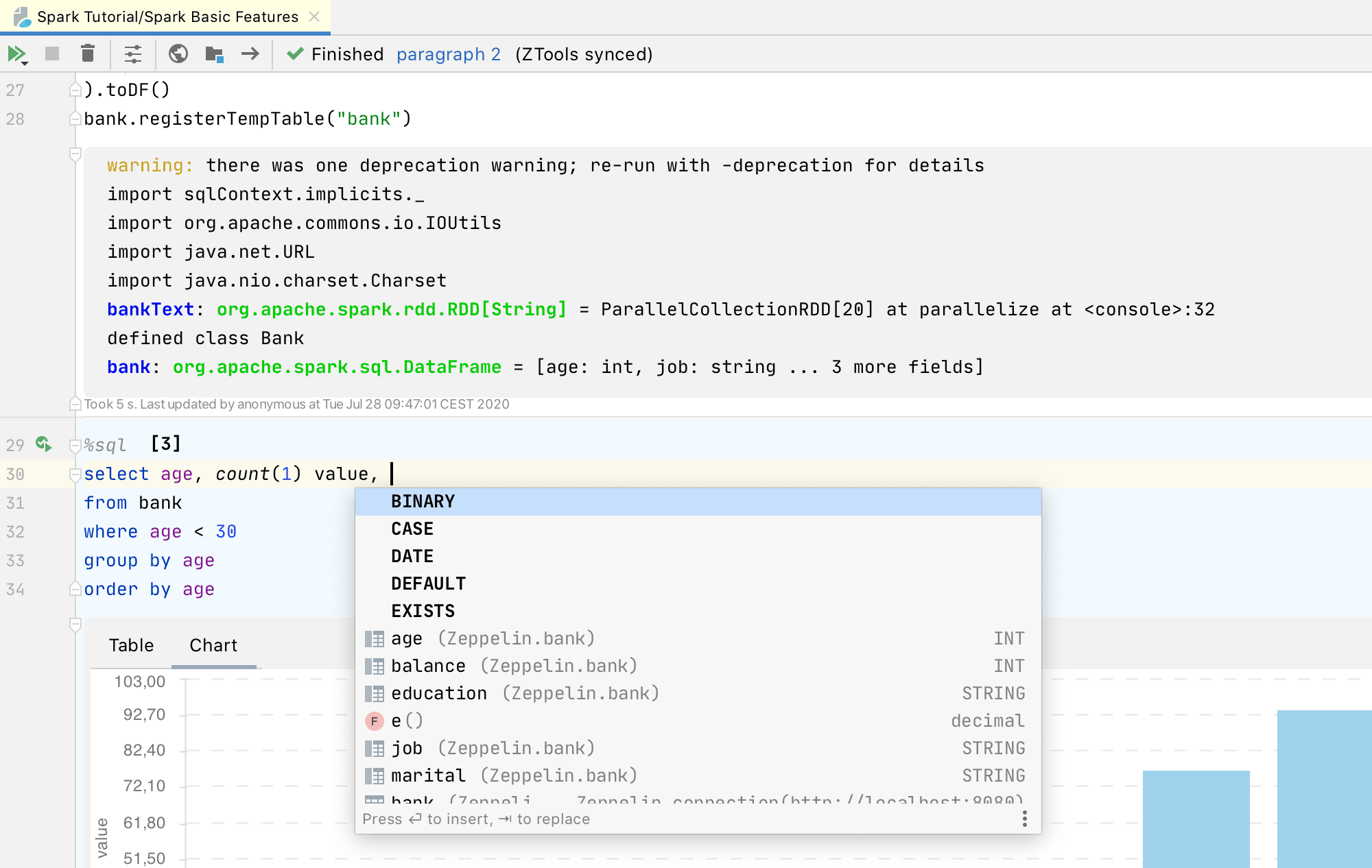 We’re thrilled to announce a new update, which is perhaps one of the biggest since the plugin was first released last year.
July 28, 2020 by Andrey Cheptsov

At the end of last year, we announced a preview of the IntelliJ IDEA Ultimate plugin that integrated Apache Zeppelin notebooks into the IDE. At the same time we shared our roadmap, in which we promised to support more tools for working with Big Data. Since then, the plugin team has been working hard and has extended the plugin with support for Apache Spark, Apache Hadoop's HDFS, AWS S3, Google Cloud Storage, and Parquet files. Because the plugin originally started with the Scala support in Zeppelin notebooks, it was reasonable for it to only be available for IntelliJ IDEA Ultimate. Now that th
May 26, 2020 by Andrey Cheptsov 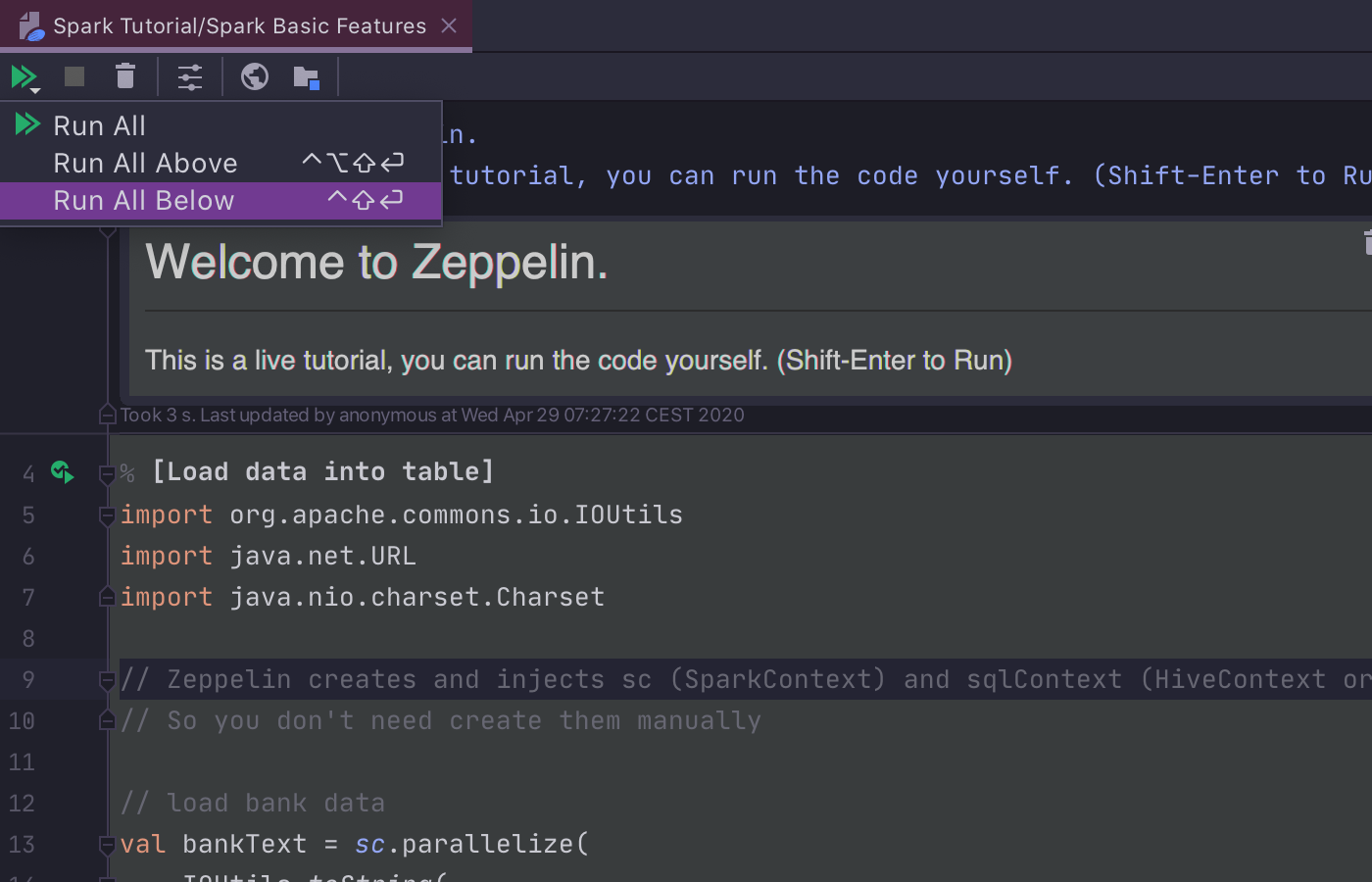 Great news for those who use our Big Data Tools plugin! We've just released a new update. In this new version we add a number of important bugfixes and improvements. We've added the support for the SOCKS proxy. Now you can configure it for your Zeppelin and Spark Monitoring connections: (more…)
April 29, 2020 by Andrey Cheptsov 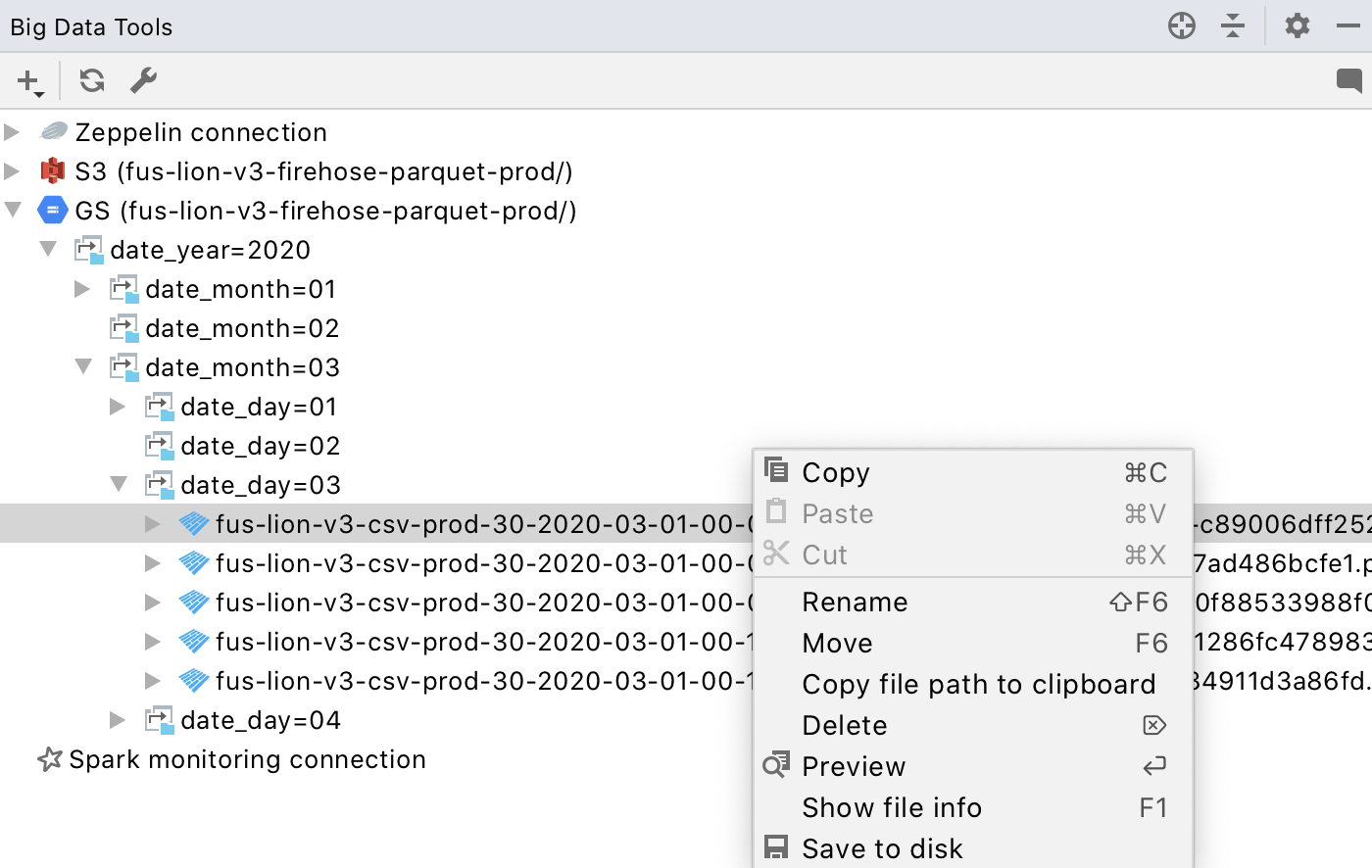 It’s been a while since our last update, but today we’re excited to give you a new EAP build. Originally we planned to exclusively work on bug fixes and stability improvements in this build. However, we couldn’t resist and added a completely new feature that has been on our roadmap for some time – integration with Google Cloud Storage. Using the Google Cloud Storage integration is similar to working with AWS S3. Once you’ve configured a Google Cloud Storage bucket configuration in Big Data Tools Connections, you’ll see it and its contents in the Big Data Tools tool window. Here’s what the conf
March 25, 2020 by Andrey Cheptsov 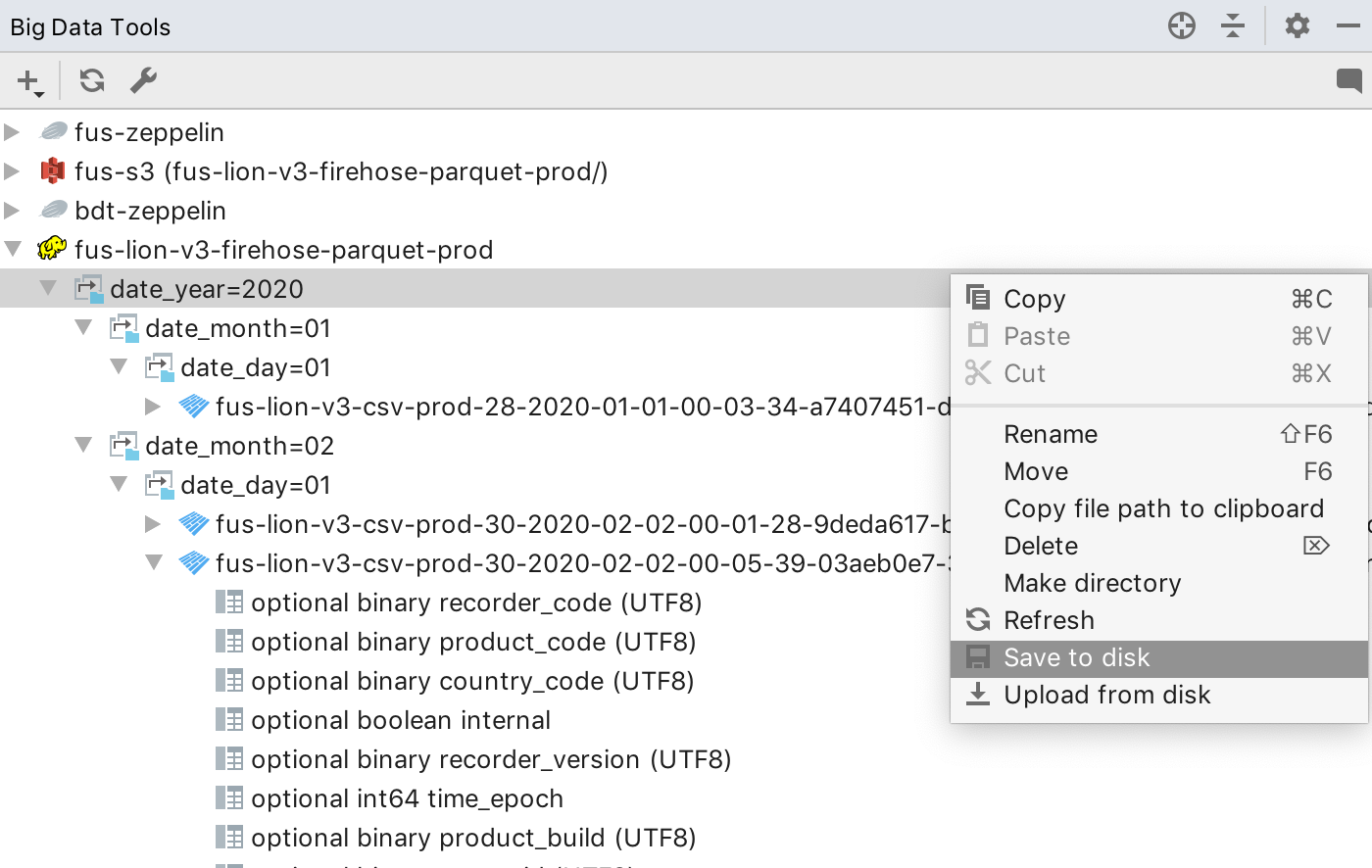 It’s been a while since our last update. If you remember, last year, we announced IntelliJ IDEA’s integration with Apache Zeppelin, S3, and its experimental integration with Apache Spark. The latter integration was released as an experimental feature and was only available in the unstable update channel. But we have great news. Today we’re releasing a new version of the plugin that finally makes Spark support publicly available. It also adds support for HDFS and Parquet. Spark Monitoring Now that the Spark integration is available in the public update, let us quickly catch you up on what it
February 25, 2020 by Andrey Cheptsov 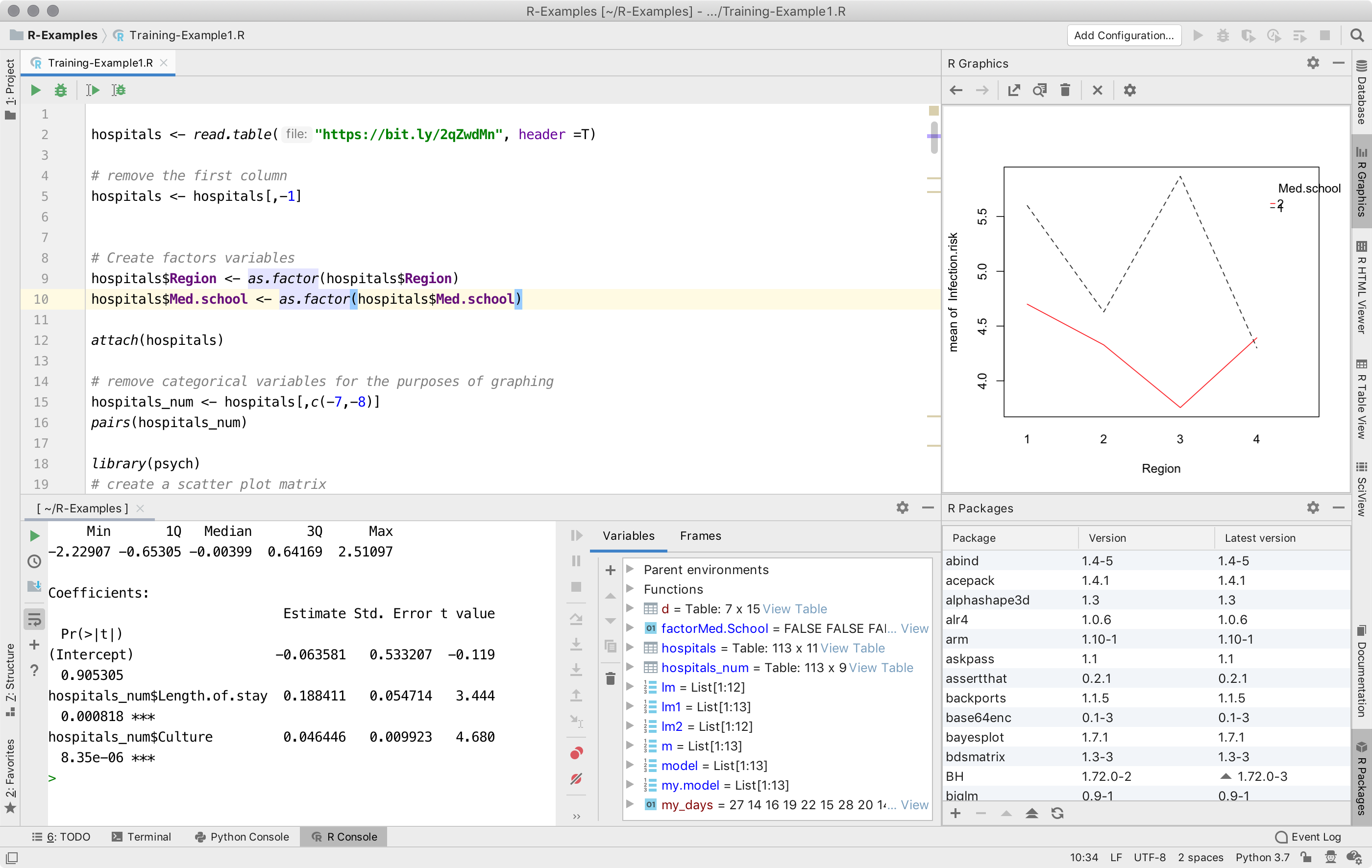 Since its first days as a company, JetBrains has relentlessly worked to make professional software development a more productive and enjoyable experience. This mission started 20 years ago with a single tool that helped refactor Java code and which later became a full-fledged IDE. Today JetBrains offers a dozen IDEs that replicate the enjoyable experience of developing with IntelliJ across multiple programming languages. In this post, we’d like to give you an update on one of those languages: the R language. Support for the R language has been available for IntelliJ IDEA for quite a while. It
February 13, 2020 by Andrey Cheptsov

This year at KotlinConf 2019, Roman Belov gave an overview on Kotlin's approach to data science. Now that the talk is available for everyone to see, we decided to recap it and share a bit more on the current state of Kotlin tools and libraries for data science. How does Kotlin fit data science? Following the need to analyze large amounts of data, the last few years has brought a true renaissance to the data science discipline. All this renaissance of data science couldn't be possible without proper tools. Before, you needed a programming language designed specifically for data science, but
December 20, 2019 by Andrey Cheptsov

Yesterday we’ve released a fresh update of the Big Data Tools plugin in which we’ve added the integration with AWS S3. With this update, you'll be able to browse and manage files in your S3 buckets right from the IDE. In yesterday’s announcement we mentioned that there is also another update to the Super-Early-Bird channel. What is this channel? A way the IntelliJ Platform offers to deliver unstable builds with experimental features. All you have to do to try the experimental features of Big Data Tools, is to register a custom plugin repository URL in the IDE settings. This can be done by
December 19, 2019 by Andrey Cheptsov

The holidays came early this year! Now, when I’ve actually looked at the calendar, I think it’s exactly on time. Whatever the case, we have some presents for you! Just today we’ve released a new update to our Big Data Tools plugin! We hope the update will make your workflow of working with Big Data a bit nicer and more convenient. The major new feature of this update is the integration of AWS S3. Now, in either the Big Data Tools tool window or the Big Data Tools Connections settings, you can configure an S3 bucket by providing the name of the bucket you’d like to access, the root path (in
December 18, 2019 by Andrey Cheptsov

This is a guest blog post by Jeff Zhang, a speaker at multiple events around Big Data, an active contributor to various open source projects related to Big Data, an Apache member, and a staff engineer at Alibaba Group. Last week, Jeff did a webinar for JetBrains Big Data Tools where he gave an overview on who data engineers are and what tools they use. The webinar was so interesting that we asked Jeff to write this guest post for our blog. This blog post will be especially interesting to you if you’re curious about data engineering, how it’s done, and what tools are used for it. Hopefully, we’
December 13, 2019 by Andrey Cheptsov

Hooray! It’s been a while since our last update on Big Data Tools. Our team has been busy addressing your feedback, fixing bugs, and adding important new features. First of all, the Big Data Tools plugin is now available in IntelliJ IDEA 2019.3 Beta. In case you don’t know, this is a new upcoming version of the IDE focused entirely on performance and UX. The update brings tons of major and minor improvements overall that will make working with the IDE even more enjoyable. Second, in order to help you get started with the Big Data Tools plugin, we’ve added the official documentation p
November 21, 2019 by Andrey Cheptsov

Last week we announced the very first version of our new IntelliJ IDEA Ultimate plugin aimed at providing tools for working with Big Data. Currently, the plugin’s functionality is limited to the support for Scala and built-in integration of Zeppelin notebooks. A lot more functionality is to come, including the support for Spark, Hadoop, S3, etc. Today we’re glad to release a little update (v0.0.356) that brings minor but important bug-fixes and improvements. Below is a list of the changes included: The support for Zeppelin 0.7.3 (BDIDE-375 and BDIDE-386) The Spark Job URL button in
October 24, 2019 by Andrey Cheptsov
Load more