C++20 modules are a new core language feature. Modules offer a unique way to organize source code with isolated file sets and independently compiled components. After a module is built, other translation units can import it without having to include and process the header files that constitute the interface of the module.

The ReSharper C++ 2022.3 EAP provides experimental support for C++20 modules. First of all, this means that the code analysis engine now understands the semantics of the new compilation model. But of course, there’s also more than that:

Let’s take a closer look at how ReSharper C++ helps you work with C++20 modules.

ReSharper C++ supports both of the main ways to introduce modules into your codebase: named modules and header units. The modern way is to use named modules. A named module defines its interface through module interface units, which by convention use the .ixx file extension. Additionally, there can be one or several module implementation units.

After you build a module, the compiler produces a special metadata file that uses the IFC format and describes the public interface of the module. This interface description in the binary format is used by the compiler to import a module into another translation unit.

The main benefit of the new approach is that modules are compiled independently of the code that imports them. This means that preprocessor definitions in the translation unit that imports a module do not affect the imported module. Moreover, there’s no need for the compiler to parse the source code of the module each time it is imported, which has the potential to improve compilation times. We recommend going through the “Named modules tutorial in C++” to learn more about using named modules in Visual C++.

Making the switch to named modules in your projects could be a daunting task. In order to make the transition easier, C++20 provides a way to use existing header files as modules through header units. The idea behind header units is that most header files are sufficiently self-contained so that instead of including them they can be imported as stand-alone modules. More generally, you can think of header units as a modern and standard-supported alternative to precompiled header files.

Thus, whichever approach you’d like to experiment with, ReSharper C++ is here to help you. 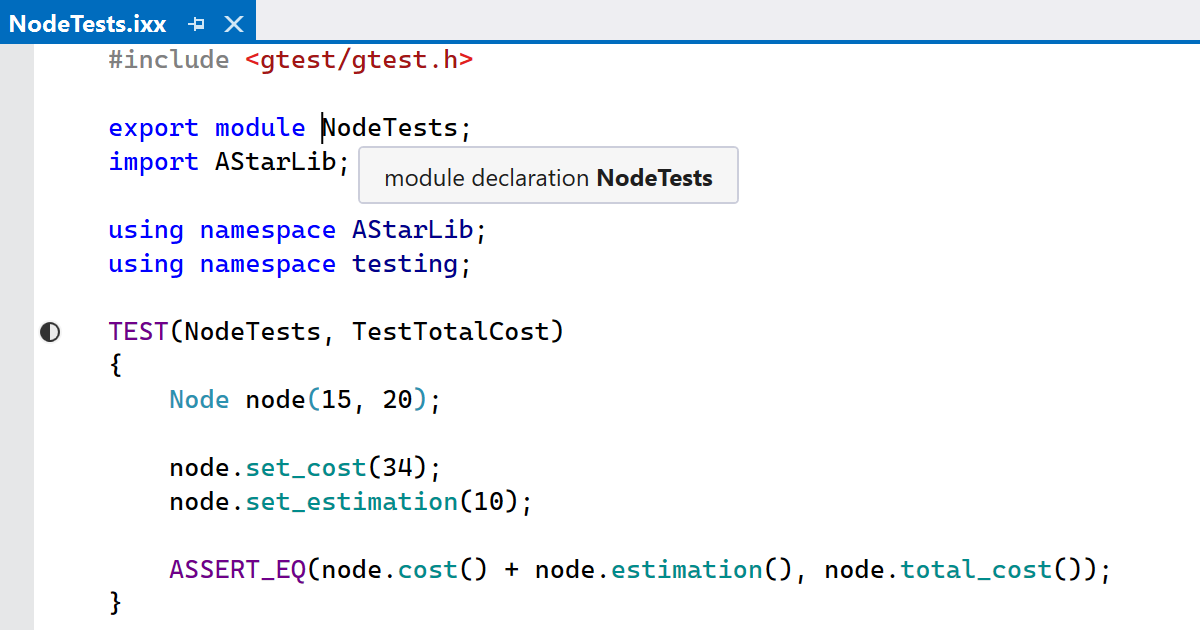 Like it does for include directives, ReSharper C++ will warn you about unresolved module names or paths in import declarations.

The code completion list now includes items from all the imported modules and header units.

If you want to quickly create a module, you can now use a new built-in file template – Module interface unit. To create a new file from a file template, use the Ctrl+Alt+Insert shortcut or select ReSharper | Edit | Create New File from the main menu:

This is just the beginning of our work on modules support, and there are still some rough edges. The most important limitation is that importing modules directly from binary module interface files is not supported yet. This means that you must have the source of the module included in your solution in order for ReSharper C++ to be able to import it. Additionally, ReSharper C++ expects module interface files to use the conventional .ixx extension.

We are working on introducing modules support in other features for a future release. Our roadmap includes plans to:

We hope you can now experiment with this long-awaited C++20 feature in your projects while using ReSharper C++. We would greatly appreciate it if you gave our modules support a try.
Check out the new EAP build and share your feedback with us in the issue tracker or in the comments below. Thank you!