We have a new Rider EAP build for you today. Highlights of this build include performance and memory consumption fixes, Unity support improvements, and F# Interactive, accompanied by a few dozens of bug fixes.

Last week, we were put to shame due to a performance impact that Rider was incurring on RavenDB development:

My requirement for IDE in 2017, don’t make me wait. @VisualStudio and @JetBrainsRider both get into 30+ sec wait on regular basis, very sad

Investigating the report revealed a set of problems, and although we’re unable to fix all of them right away, we did get rid of some:

The fixes should hopefully make development in Rider a smoother experience on larger solutions, especially those containing large volumes of JavaScript or TypeScript code.

The RavenDB case helped reveal more problems that will take more time to get addressed, which means we’ll be planning some architectural changes in ReSharper and Rider for further releases later this year.

You can now use the F# Interactive tool window for F# scripting: both without ever leaving the console and by throwing selected lines or selections from the text editor. There’s a separate keyboard shortcut to send to F# Interactive, and the action is also available in Rider’s mainstream Alt+Enter menu: 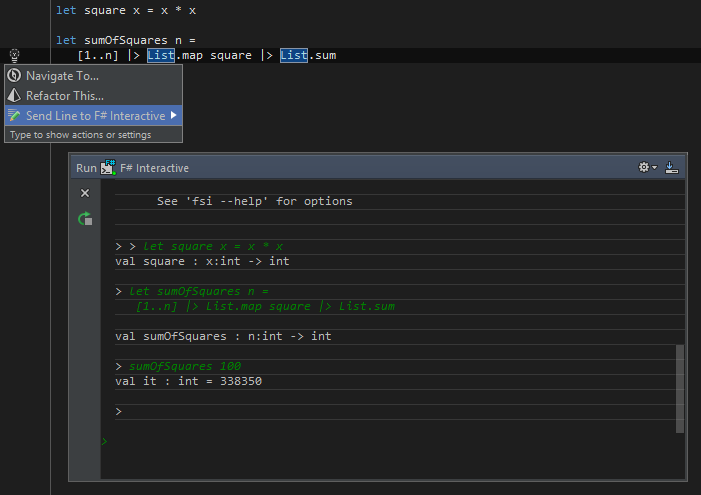 First off, there’s something that we had done for EAP 23 but didn’t have a chance to talk about. We have recently refactored two separate Rider plugins for Unity into one plugin that:

In other Unity news, when opening a Unity solution, you will be prompted to disable Rider’s auto-save feature to prevent frequent recompilation, and Rider will in fact make these configuration changes for you:

Please download the latest Rider EAP build and give it a try. Do submit any exceptions that you encounter: it’s essential for us to have a profile of current exceptions before we switch to production builds as we wrap up for the release.