However, one thing clearly stands out:

.NET Core debugger is back on Mac and Linux

Back in February, we were forced to temporarily disable .NET Core debugging due to a licensing issue (for a recap, here’s what happened). Restoring the functionality on Windows was fairly straightforward (it only took us one week); Mac and Linux, not so much.

Finally, following a few months of reading, writing and debugging code, scratching heads, testing and fixing, we’re ready to roll it out: you can debug .NET Core on OS X and Linux again. 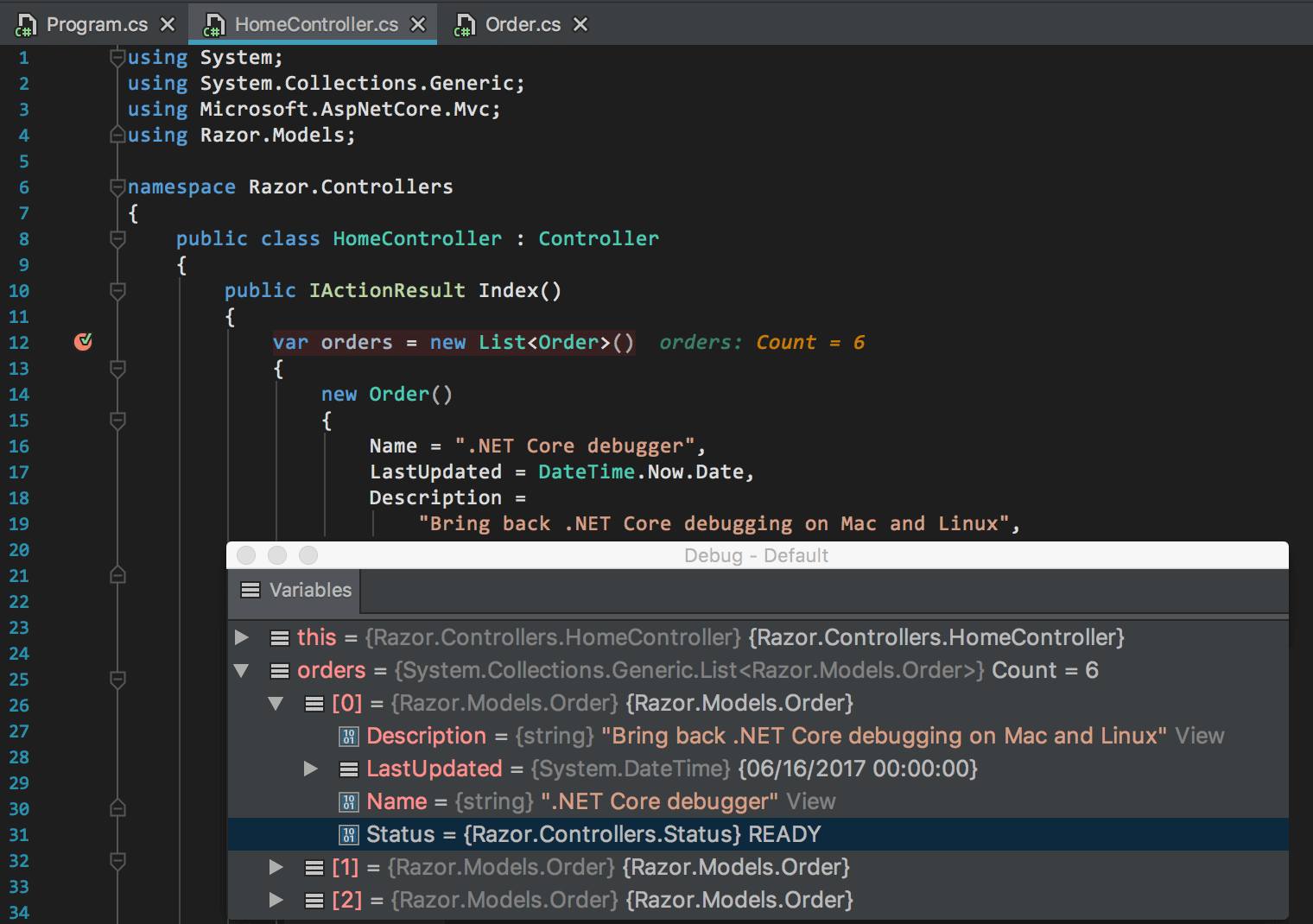 What else to say? Thanks for bearing with us.

In related news, Rider can now use MSBuild shipped with .NET Core SDK. In practical terms, what it means is that you no longer need Visual Studio on Windows or Mono on Mac/Linux to open and build .NET Core projects with Rider.

Rider has received more debugger improvements in this build, such as the following: 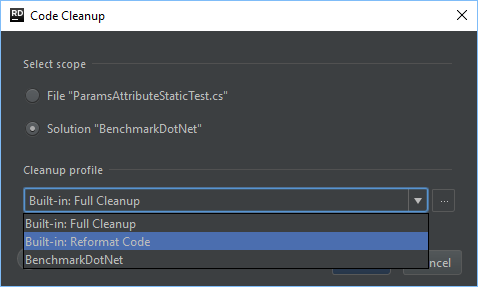 Depending on the selected cleanup profile and your preferences, applying Code Cleanup on a file or a wider scope will simply reformat your code, or additionally apply code style rules and remove code redundancies: the list of actions that Code Cleanup supports is really long.

As of this EAP, Rider’s Code Cleanup doesn’t let you customize profiles (this is work in progress) but if your solution contains saved ReSharper settings, Rider will respect them and expose cleanup profiles that are defined in them.

Rider’s F# plugin has received a few notable improvements that make use of the underlying ReSharper infrastructure.

You can now run and debug NUnit or xUnit unit tests. Tests and test fixtures are discovered, highlighted in the editor, and are available to run, debug or add to sessions via the Alt+Enter menu. If necessary, you can run tests written in C#, VB.NET and F# in the same test session.

Finally, Rider learns to take F# code into account when it looks up your solution for to-do items and displays them in the TODO view:

You don’t always want to display target frameworks under all error items, and you can toggle this presentation with the Show Frameworks in Tree toggle button in the toolbar.

We have reworked the Project Properties window to make it accommodate more project configuration items and have a saner UI:

On a related note, there’s now a Solution Properties window that lists and lets you manage debug/release build configurations available on solution level and and per-project: 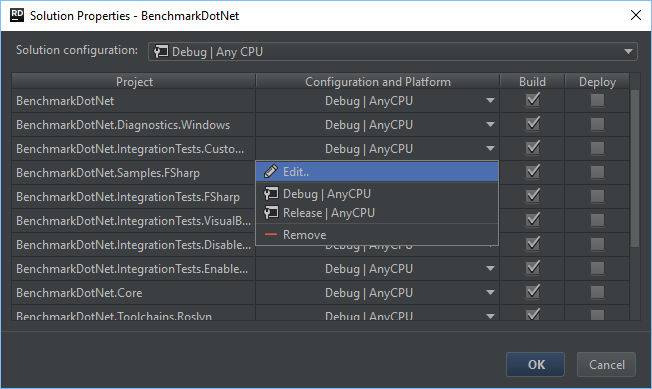 Rider allows creating quite an array of various .NET project types, but prior to this build, the list didn’t include any VB.NET project templates. This is now fixed as class library and console application templates are available for VB.NET: 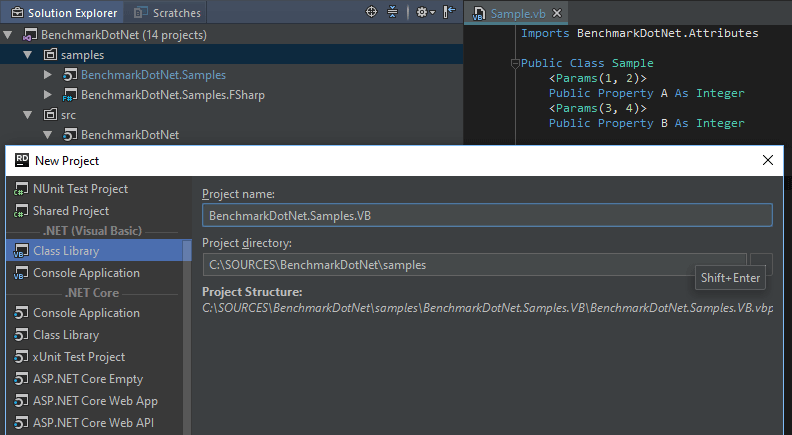 We are putting considerable effort into clearly notifying you about any required toolsets, SDKs and other components that Rider needs to operate correctly. In this EAP, we have introduced a set of diagnostic notifications that Rider shows when it fails to load projects in your solutions:

This EAP improves support for web.config (and whatever.config) files: we have brought a set of Rider’s XML features to .config files, such as typing assistance, tag and attribute completion, navigation to namespaces, code formatting, and XML structure view in the editor: 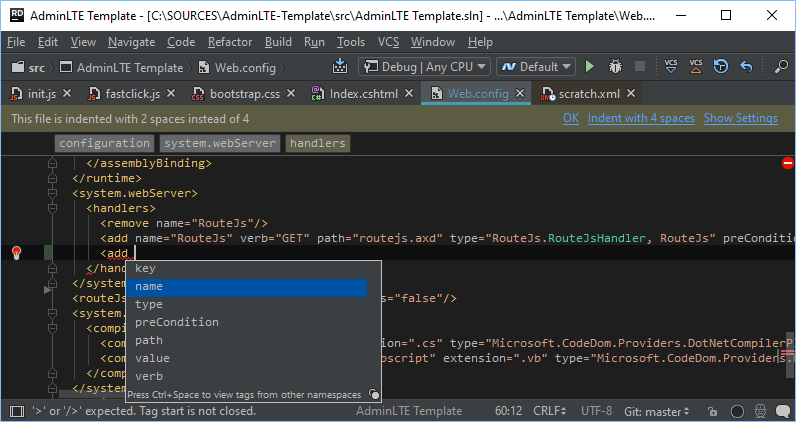 The console that Rider shows in the Run tool window has been reworked, which hopefully removes a series of annoying bugs such as weird characters on executing Console.ReadLine(), broken Console.ReadKey(), and incorrect cursor behavior.

Get the latest Rider EAP build and try it out. Please reach out to us if you face any critical issues.

23 Responses to Rider EAP 23: .NET Core debugger is back, Code Cleanup, and more

As developers, we love tools. But often, too much tooling gets in the way when trying to develop applications quickly. Have you ever been ripping through code when you want to refactor or do a common task, but just can’t find the command for it because there are too many distractions? It’s very frustrating! Let’s take a look at how ReSharper brings back simplicity when using an IDE, with its famous Context Actions - or Alt+Enter - the small but mighty problem-solving shortcut. And keep in mind: Rider builds on top of ReSharper, so these features work there, too! Enter, Alt+Enter! Context Actio
November 30, 2020 by Rachel Appel

With the .NET 5 release comes the newest Entity Framework Core version, unsurprisingly called Entity Framework Core 5 (EF Core 5). The .NET community got its first glimpse of Entity Framework (EF) on August 11th, 2008, with the release of .NET Framework 3.5 Service Pack 1. Let's say a few things have changed since the initial release. For those unfamiliar with the technology, Entity Framework is an object-relational mapper (ORM), helping developers overcome the impedance mismatches between C# and a database instance's schema. Entity Framework has come a long way since its original inception.
November 25, 2020 by Khalid Abuhakmeh
Subscribe