Rider for Unreal Engine Preview is widely used by game developers around the world. More than 38,000 people are registered in the program, and we’ve received extremely positive feedback from them. Now we are finally planning to release Rider for Unreal Engine as part of our Rider IDE in 2022! This also means that, quite likely, Unreal Engine/Blueprints/C++ support will be enabled during the Rider 2022.1 EAP.

Rider for Unreal Engine is feature rich, fast, and used by many game developers for their work and personal projects on Windows and macOS, and today we have made it available on Linux!

Rider for Unreal Engine on Linux

With Rider, we’ve always targeted cross-platform development, doing our best to deliver the same user experience and product benefits on all three major platforms. Unreal Engine is no exception here. We started with Rider for Unreal Engine being Windows-only and later added macOS support. Today we are happy to share the first ever Linux build of Rider for Unreal Engine. It generally works for any Linux version that meets both the Rider and Unreal Engine system requirements. For compilation, clang will be used from your Unreal Engine installation; for debugging, Rider brings the patched LLDB 13. This means, you only need to get the engine itself and install Rider to start working on Linux.

There are a few known limitations and issues, but before we move on to them, let me briefly share what Rider for Unreal Engine on Linux is capable of.

You can open a project in Rider for Unreal Engine directly via .uproject file – you don’t need to generate any extra project models like Makefiles. The project will be loaded and indexed, and then it will be ready for you to commence work. You can launch your project targets from Rider, like in the game we have here – we used a demo project from Tom Looman’s course as an example: 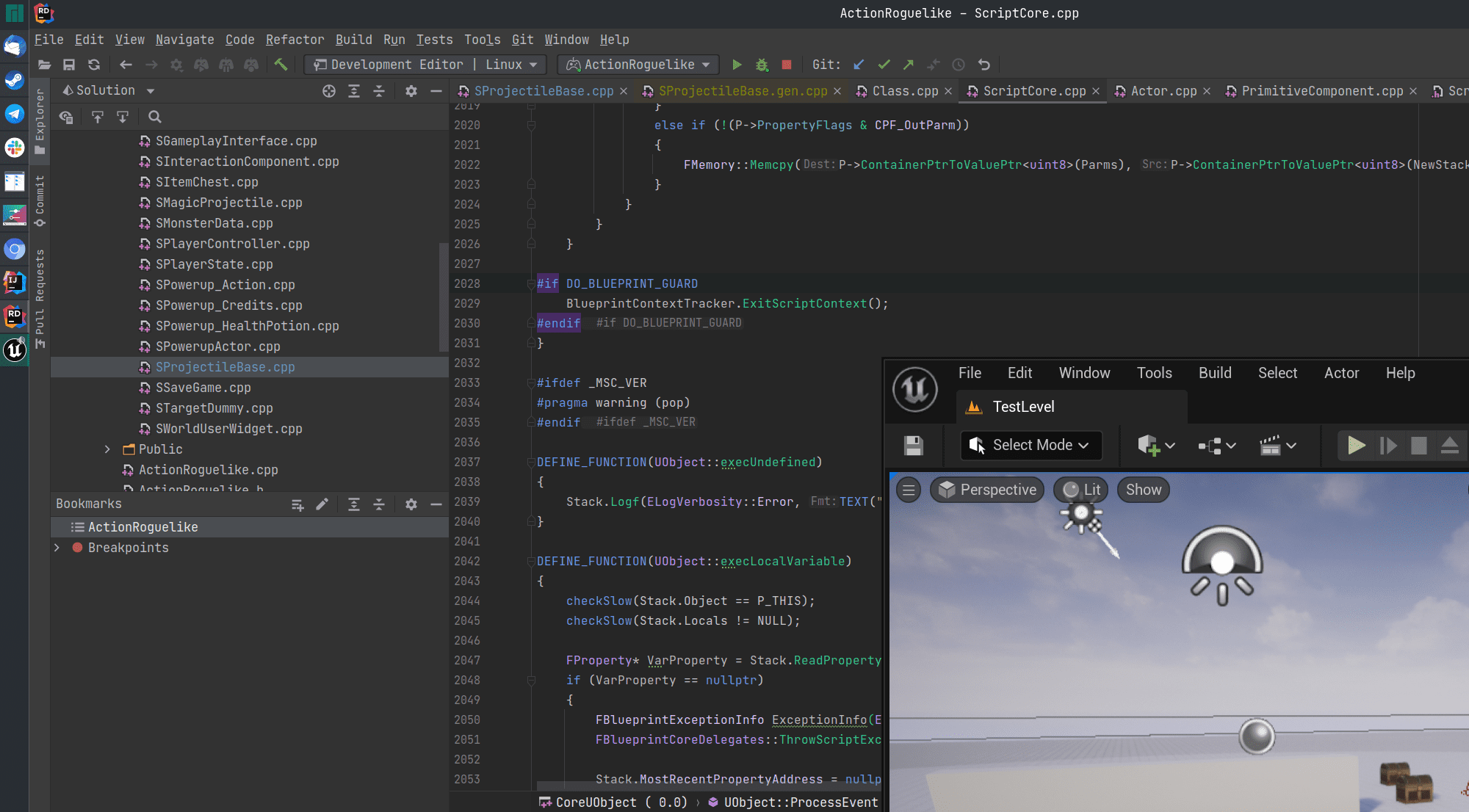 You can debug your project from Rider using the bundled LLDB: 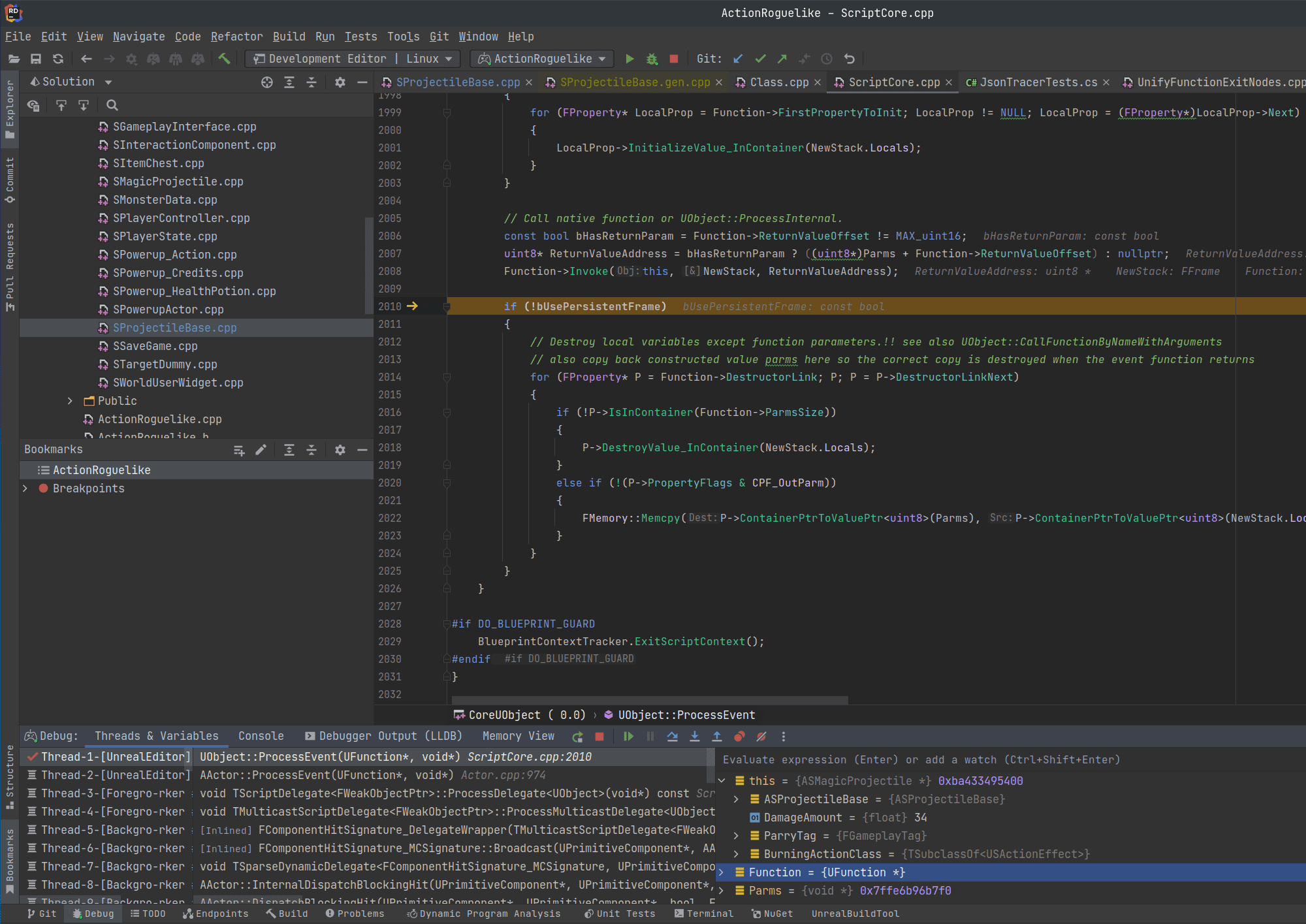 Set breakpoints, step through the code, evaluate arbitrary expressions, and inspect the values of variables, which are shown right in the code editor or in the debugger tool window.

Code assistance actions, navigation, code analysis, support for the Unreal Engine reflection mechanism and Blueprints – everything you benefit from in your Unreal Engine development on Windows and macOS is now also available on Linux. For example, you can complete UE reflection specifiers and read the built-in documentation for them in the completion pop-up:

Or search for implementations in Blueprints:

Ready to give it a try? Before you join our Rider for Unreal Engine Preview, you should consider the following known issues and limitations.

Known issues and limitations of Rider for Unreal Engine on Linux

As we mentioned above, any version of Linux that meets both the Rider and Unreal Engine system requirements is fine for running Rider for Unreal Engine. However, to make it work as smoothly as possible, we contributed a few patches to the engine itself, and some of them are still under review. We’ll share the links so that you can apply them on your own instead of having to wait for the official Unreal Engine release with them.

Other fixes in Rider for Unreal Engine 2021.3

Among other important enhancements: