I get a thrill every time I reveal what we’ve been working on for the better part of the year. That’s because every major release of IntelliJ IDEA raises the bar, and every new version is more of a challenge than the one before. Every release is an opportunity to prove that the sky is our only limit.

It is my pleasure today to introduce the new features and enhancements we’ve created for you in IntelliJ IDEA 14. 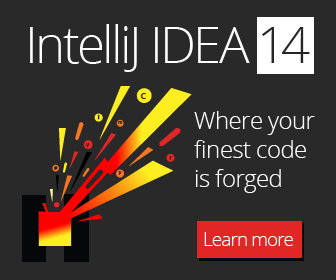 To facilitate your workflow, we’ve added a decompiler for Java classes. You don’t need any third-party plugins to have a look at what’s inside any library for which you don’t have the source code.

The debugger, a core tool of every developer, has also been improved in a number of ways. Now it shows variable values in the editor right next to their usages. It also offers a new Show Referring Objects action, and supports lambda expressions in the Evaluate expression dialog.

The editor, where you spend most of your time, remains the heart and soul of IntelliJ IDEA. As always, we focused on making it even better for v14. Meet the smart Backspace key behavior, code style detection, Scratch files, improved Multiple selections (which now come with handy shortcuts), a ‘Copy as HTML/RTF’ action, a faster ‘Find in path’ action, and lots of other tiny but very helpful enhancements.

Code inspections have been extended to provide a new key code analysis feature aimed to infer @NotNull, @Nullable and @Contract annotations for your Java libraries automatically, based on their bytecode.

Other notable enhancements include:

Support for the Play 2.x framework has moved to the Scala plugin, so you don’t need to install the plugins separately anymore. The updated Scala plugin comes with the Change Signature refactoring, support for anonymous functions in the Evaluate expression dialog, reworked SBT integration, faster performance, and brand new project configuration model.

Support for trending JavaScript frameworks such as React, spy-js, Node.js and Grunt, announced earlier in WebStorm 9, is now available in IntelliJ IDEA 14. In addition to these improvements, the IDE offers two brand-new plugins: for Meteor, and for PhoneGap, Cordova and Ionic frameworks. Following Java, JavaScript also gets the postfix code completion feature.

And last but not least, IntelliJ IDEA 14 adds a number of new features from Android Studio, including support for Android Wear and TV, along with many other enhancements.